The church of San Salvatore lies to the north of the town centre of Spoleto, inside the cemetery at the foot of Ciciano Hill. It was a peripheral burial ground in Roman times and throughout the medieval period, when the hill became an important martyrs’ cult centre for Spoletans of Lombard race. It was also the location of the church of San Michele Arcangelo and the San Ponziano graveyard – where the gravestone of a Lombard  named Agipertus was found. Not far away stands the old church of San Sabino, flanked by an extensive cemetery with burials dating from the 4th – 5th century to the Lombard period.

The Museo Nazionale del Ducato di Spoleto (National Museum of the Duchy of Spoleto) houses the most important Lombard finds and explains how the territory was organized from the earliest 4th century Christian settlements up to the establishment of the Lombard Duchy of Spoleto by Faroald I, which took place shortly after the Lombards’ arrival in Italy (568).

The Duchy remained independent until 729 when it was subjected to the rule of the Lombard king Liutprand. It survived long after the fall of the kingdom (774), passing first under the control of the Franks and finally, in 1198, becoming part of the Papal State. 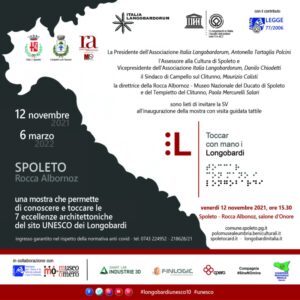 View photos of the exhibitionfoto!