‘The Longobards in Italy. Places of Power (568 – 774 A.D.)’ is a Serial Site that was listed as UNESCO World Heritage in 2011. It comprises the most important monuments of the Lombard people in Italy, which are spread throughout the country from north to south, in correspondence to the territories of the principal Lombard duchies.

The properties included in the site constitute – each for its own type – the most significant or best preserved examples among the numerous survivals present in Italy, reflecting the universality of Lombard culture at its peak. They are: the Gastaldaga area and episcopal complex in Cividale del Friuli; the monumental area with the San Salvatore – Santa Giulia monastery in Brescia; the castrum with the Torba Tower and the church of Santa Maria foris portas at Torba and Castelseprio; the church of San Salvatore in Spoleto; the Clitunno ‘Tempietto‘ in Campello sul Clitunno; the Santa Sofia complex at Benevento and the Sanctuary of San Michele in Monte Sant’Angelo.

The Associazione Italia Langobardorum, established in 2009 by the councils in the network, is a non-profit organization that manages the UNESCO site; it plans, coordinates and monitors network activities for developing, promoting and increasing public awareness of the site.

‘Getting in Touch with the Ancient Lombards’

The exhibition aims to raise awareness of the UNESCO site’s distinctive traits and complexity. A tactile itinerary and a differentiated range of user options make it easier to understand for all visitors, guaranteeing an optimal multisensory experience.

Three-dimensional scale models have been specially made; some are of the areas in which the monuments of the seven sites are located, whereas others are of the architectural monuments that constitute the Lombard serial site itself, allowing their particularities to be appreciated.

The 7 monuments reproduced as models are:

– the church of San Salvatore – Santa Giulia in Brescia;

–  the church of San Salvatore in Spoleto;

– the church of Santa Sofia in Benevento;

– the sanctuary of San Michele at Monte Sant’Angelo.

By means of NFC (Near-Field Communication) technology an audio guide is provided in English and Italian, that explains – in terms that are easy to understand – each building’s main architectural aspects and its historical and artistic features.

An exhibition catalogue in Braille and large print, in both Italian and English, is also available.

After being on show in the Museo Tattile Statale Omero (Homer State Tactile Museum), the exhibition will be put on in each of the 7 towns that belong to the UNESCO site, and others that are members of the Association.

The exhibition is curated by the Italia Langobardorum Association and funded by the Italian Ministry of Cultural Heritage and Activities, and Tourism (L.77/2006 EF 2017). 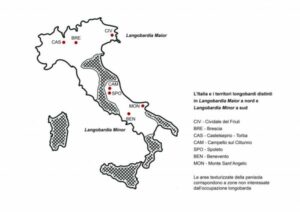 Getting in Touch with the Ancient Lombards allows visitors to appreciate all the monuments belonging to the serial siteThe Longobards in Italy. Places of Power (568-774 A.D.) and appreciate the distinctive traits of Lombard culture displayed in its surviving architecture. The Lombards settled in Italy after a long migration period and assimilated Roman traditions, the Christian religion and Byzantine influences, integrating these with their Germanic heritage and giving rise to a new and original culture in the 7th and 8th centuries AD.

They developed their own characteristic architectural style that spread to all the duchies in the kingdom, with a ‘modern’ uniformity of vision which emerged from the varied perspectives and aims of the elite building clients (kings, dukes and other nobles). These new artistic and architectural tendencies, reworked by Lombard craftsmen, formed the basis of the following Carolingian ‘renaissance’ and the spread of a new – the first European – culture.

The monuments are not uniform with regard to type, but vary considerably in shape, size and function: a historic town centre (Cividale del Friuli), a fortified settlement (Castelseprio-Torba), a monastery of royal foundation (Brescia), churches (Spoleto, Campello sul Clitunno and Benevento) and the Lombard people’s national sanctuary (Monte Sant’Angelo). These seven diverse monuments are united by their intentional, ideologically-motivated reuse of components of earlier buildings (spolia) to make original, innovative constructions.

The exhibition presents each building’s main architectural aspects and the position of its notable stylistic and decorative features, together with a three-dimensional model comprising the surrounding area so that it may be appreciated in a wider context. The scale of reproduction differs between sites – being chosen to favour tactile exploration of their various shapes, sizes and architectural details – but a model of all together in scale 1:200 allows direct comparison between them. The architectural models of the larger monuments – Cividale del Friuli, Brescia, Castelseprio and Monte Sant’Angelo – feature only the Lombard period building phases. In models which include the surrounding area, the Lombard monuments and associated features are highlighted with respect to other urban structures, as indicated in the captions.