The Sanctuary of San Michele Arcangelo is one of the most complete surviving Early Medieval sacred sites, distinguished by historical and religious continuity, and an unceasing stream of visitors that remains constant to the present day.

In 650, after being defeated by the Byzantines, the Lombards of the duchy of Benevento took possession of the Gargano, where they established the cult of the Archangel Michael – particularly favoured by the Lombards and similar to the pagan god Wodan, considered by Germanic peoples the supreme god, god of war, ferryman of souls and protector of heroes and warriors.

The main parts of the sanctuary as it is now, the ‘Angevin’ nave and the cave, merge together to great effect.

In the second half of the 7th and the 8th century extensive work was carried out in the sanctuary, funded by the Lombard dukes: a new staircase was built that led to the altar of the footprints and reached the walkway to the large church, the current cave, which was flanked by a new monumental staircase that started from the original entrance.

At the same time, the monumental stairway was connected to a gallery about 40 metres long, which served as temporary accommodation for pilgrims.

These religiously-motivated human interventions that altered the form of the natural cave, and the numerous writings conserved on the sanctuary walls – about two hundred, incised and scratched – allow the history of this extraordinary place of diverse encounters to be reconstructed. 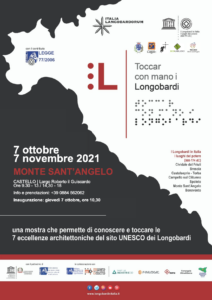 View the photos of the exhibition!