The Lombard ‘temple’, also known as the Oratory of Santa Maria in Valle, is situated inside the monastery of the same name; it is one of the most important surviving examples of Lombard architecture and art in Italy. The building was founded in the 8th century as a palatine chapel of the royal court – which explains its high quality. It then became the monastery chapel, subsequently passing into the hands of Cividale del Friuli Council.

Externally, the building has a sober appearance – in stark contrast to the rich decoration that is still present inside. The interior consists of two rooms, divided by an ancient barrier: the presbytery area covered by three barrel vaults and an almost square chamber with a groin vault. The walls of the latter are interrupted by alcoves with arches; the westernmost of these frames the main entrance and still has its original appearance. Numerous components such as corbels, lintels and columns are of Roman date, and were deliberately re-used in this building – as also were the columns, pillars and other Byzantine-era items present in the barrier that separates the presbytery from the main chamber. On the walls there are outstanding stuccoes, a group of six saints and martyrs, as well as an arch with a vine branch, and elegant wall paintings depicting saints and Christ with archangels.

“Getting in Touch with the Ancient Lombards” has arrived at the Monastery of Santa Maria in Valle in Cividale del Friuli! 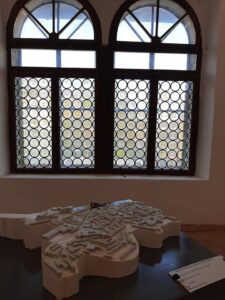