Part of the town of Campello sul Clitunno (province of Perugia, Umbria region)  where the ‘tempietto’ stands

The Lombard ‘temple’ is located in the Pissignano locality in the municipality of Campello sul Clitunno, on the side of San Benedetto Hill, overlooking the Clitunno Valley near Spoleto. Nearby is an old residence called ‘Vecchio Molino’ (Old Mill), near the springs that give rise to the River Clitunno. In the Roman Republican and Imperial epochs historians and poets celebrated the natural beauty of this area, with its enchanting landscape and fresh, pure spring water.

Little is known about the settlement here in Early Medieval times. Other than the ‘tempietto’ there are only isolated structural remains, most of which were incorporated into later buildings – such as the Pieve di Sant’Angelo in Capite, some walls of which may still be seen in a modern building close to the ‘temple’. It is thought that a baptistery of San Giovanni also existed, and that these two buildings were Lombard constructions contemporary with the ‘tempietto’ (7th and 8th century, Lombard Duchy of Spoleto). 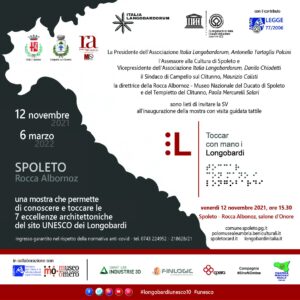