Lombards in the Limelight

The “Lombards in the Limelight” project was organized to make known to a wider public the museums of the seven towns in the serial site (Cividale del Friuli, Brescia, Castelseprio-Torba, Spoleto, Campello sul Clitunno, Benevento, Monte Sant’Angelo), in collaboration with one another and several national museums with Lombard/Early Medieval sections.

The Italia Langobardorum Association has organized “Lombards in the Limelight” to spread awareness of the Lombard people’s culture.  Collaboration and synergy between network museums and the national museums of important Lombard cultural areas have led to the development of 7 major themes, which are divided into 15 temporary exhibitions.

“Lombards in the Limelight” has a single integrated catalogue, and is also a virtual exhibition. 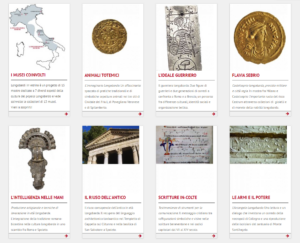 Lombards in limelight is:
15 exhibitions
13 museums
7 different aspects of the culture of the Lombard people 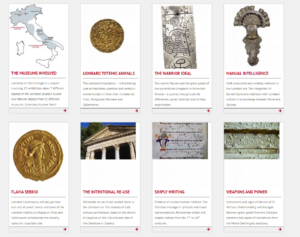 In addition to the museums involved you can find on the maps the Lombard’s places member of the UNESCO site “The Longobards in Italy. Places of the Power (568-774 A.D.)” 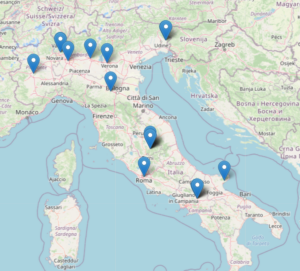 That of the Lombards is more than a story, it is a parable…

He faces the sea, mounted on his steed, with long blonde hair flowing over his shoulders like a golden halo. His slim muscular body stands out against the sun, his eyes as blue as the infinite blue that stretches out before him. In his hand a spear, with a tip of flashing metal. He reaches out resolutely, until the spearhead touches the column of the ancient temple that occupies the Reggio headland like a solitary sentinel.

Behind him his armed followers exult, shouting his name: “Authari! Authari!”

The young king raises his arms in a gesture of victory.

From north to south it is finally all his and his people’s, that land for which they have fought so hard, and he claims it with his warrior’s spear. But this is not the gesture of a barbaric marauder – it is the gesture of an emperor, a new Constantine, a link between the glorious past to the glories yet to come.

Beyond that blue sea lie Constantinople and the Byzantine dominions. Authari is there not to mark a limit, but a new boundary. Now the Byzantines are Easterners, and they are different.
The West belongs to the Lombards and the Romans, fused together into a new people: his own.

That of the Lombards is more than a story, it is a parable. They came down from the dark north looking for
better lands and booty, the most barbarous of the barbarians: an undefined chaos of tribes and humankind, held together only by need and ambition. They entered the garden of the empire
like those who want to possess, but in the end they themselves were possessed. The Goths in Italy had remained Goths, later the Franks came too, but remained always Franks. The Lombards no. They changed, adapted, camouflaged and saw themselves as a community, so much so that when their kingdom collapsed it was no longer possible to distinguish them except by their names.

They were an experimentation of continual questions and answers, of inventing new pathways. Authari’s spear touches an ancient column not to destroy it – but to absorb its history. The
Lombards were the heirs of what went before, and feel destined to pass it down
to posterity. They are not guests, they are not conquerors. They wanted a home and they found it, and worked hard to administer, understand and protect it. They are no longer barbarians, they are no longer
foreigners.

They are the first Italians. Because the Lombards are not “them”, they are “us”. 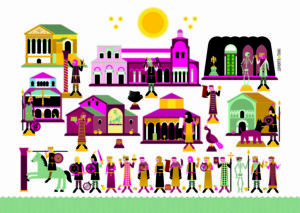