The church of San Salvatore – which lies within the Santa Giulia monastery complex, now Brescia Museum – is located in north-eastern Brescia, at the foot of Cidneo Hill. To the north, the proposed limit extends just beyond what is thought to have been the line of the Augustan city wall, and includes all of Cidneo Hill – a feature of considerable importance in Brescia’s history, where the castle stands today.

As well as Lombard structures, the zone reproduced contains most of the significant buildings and open areas of the Roman city centre that were re-used. Via dei Musei is flanked by the Roman forum, together with the 1st century BC temple and the subsequent Capitolium (AD 73), the theatre, the porticoed forum itself and the basilica. This is one of the most extensive and best preserved archaeological areas in North Italy, and forms an integral part of the Santa Giulia Museum itineraries. The women’s monastery founded in 753 by Desiderius, Duke of Brescia and later King of the Lombards – in an area occupied by luxurious town houses in the Roman period, with remains open to visitors – was an institution of great importance at the time. Its stature resulted in various architectural interventions over the centuries; the complex now includes the Romanesque church of Santa Maria in Solario, two cloisters, the nuns’ choir and the 16th century church of Santa Giulia. 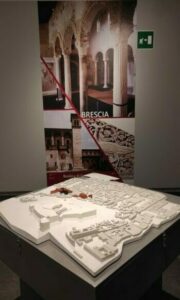 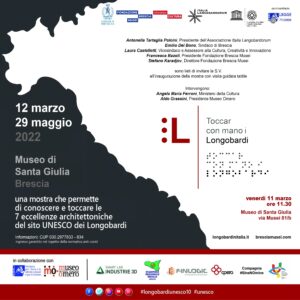