The Castelseprio Archaeological Area is located on a high terrace surrounded by woods and – lower down – by deep river and stream valleys. The area is an outstanding example of the re-use of a late Roman upland fortification after the Germanic invasions. The castrum was destroyed in the 13th century and then abandoned, but its essential features remain. The imposing defensive wall and the religious complex of San Giovanni Evangelista, with a church and an octagonal baptistery, were rebuilt by the Lombards in the 7th century; aristocrats were buried both inside and outside them. In the Lombard period this was the seat of a gastald, an official who administered possessions of the Lombard king, promoting the construction of important buildings such as the church of Santa Maria foris portas and the monastery of Torba – which together constitute the Torba monumental complex, an extension of the fortified site of Castelseprio.

The settlement is an important example of a rural power base, and is enclosed by a defensive wall that continues as far as Torba, situated in the flat valley bottom of the River Olona.

Torba Tower was built in the 5th – 6th century and is the only surviving building dating to late Roman Imperial times, when the complex was a military base. In the Lombard period Torba became the home of a community of Benedictine nuns. Important remains associated with this transformation are the splendid wall paintings decorating the tower’s two storeys; they date to the late 8th century, when the nuns re-used the building as a chapel and place of burial, after which the church and nearby monastery were built. 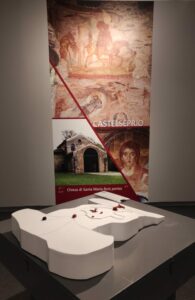 The “Getting in touch Lombards” Exhibition will come to Castelseprio in Fall 2022!