The church of Santa Sofia is located in the historic centre of Benevento, in the square named after Giacomo Matteotti that faces Corso Garibaldi. The complex includes the church itself, the bell tower next to the square, and a cloister – part of the old monastery – which today houses the Museo del Sannio (Samnium Museum).

The Lombard settlement was founded not long after AD 568, the year the Lombards arrived in Italy. In the south of the country they occupied an extensive territory that had been previously been ruled by   Byzantium.

The area inhabited by the Lombards was smaller than the Roman town of Beneventum, because certain portions of the latter, situated east and north of the current old town centre, were abandoned. The town was enclosed by a defensive wall, large stretches of which probably already existed; it was rebuilt and strengthened after damage suffered during the Gothic War. In the 8th century widespread construction was conducted in the town under Arechis II, who was aware of the importance that the Duchy of Benevento acquired after the collapse of the Lombard kingdoms in northern Italy. He promoted significant building work in order to enhance the monumental structures in this city that had become a capital thanks to its geographical position, at an obligatory point of passage on routes between the Tyrrhenian Sea and the Adriatic. 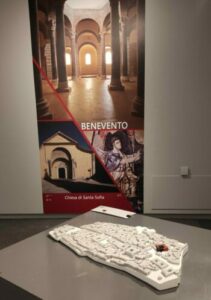 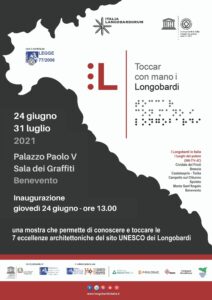